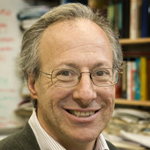 I am interested in the evolutionary genetics of wild animal populations, particularly of dogs and dog relatives. A new aspect of our work is to identify and study specific genes that influence the form, physiology, and behavior of organisms in nature. This has become possible because the dog genome has now been fully sequenced. Wolves are close relatives of dogs and so much of this new genetic information also applies to them. My colleagues and I took advantage of this new knowledge and identified the gene that causes black coat color common in North American wild wolves. We discovered that the mutation that causes black coat color in wolves came from a hybridization event between Native American dogs and wild wolves that probably occurred thousands of years ago. This dog gene has swept through North American wolves and is the first example of a mutation that appeared in a domestic species that has become common in a wild relative species. This type of discovery brings us closer to the holy grail of evolutionary biology: to understand and record the simultaneous changes in the genome and in the phenotype of organisms under the force of natural selection operating in wild populations. We are accustomed to thinking that such studies can only be done in the laboratory, but the new field of genomics opens the door to doing such studies under natural conditions for the first time. It is a new day in evolutionary biology.