On October 2, 2006, George A. Bartholomew, distinguished emeritus professor in UCLA’s Department
of Ecology and Evolutionary Biology, passed away at age 87 of complications from cancer. Known as
“Bart” to his students, colleagues, and friends, Bartholomew was an outstanding scientist of
international renown, was a distinguished mentor of graduate students, and played important roles
in shaping the history of his department and of the life sciences at UCLA. He earned his Ph.D. at
Harvard in 1947 and joined the UCLA faculty shortly thereafter, devoting his entire academic
career of more than four decades to UCLA until his retirement in 1989. 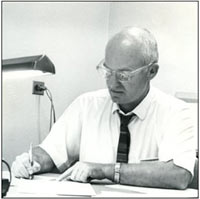 Bart was born June 1, 1919, in Independence, Missouri. His father, George A. Bartholomew, was a
commercial artist and his mother, Esther Carstensen Bartholomew, worked first as a sales person
and later as a children’s wear buyer for the Joseph Magnin Department stores in the San Francisco
area. Bart earned his Bachelor’s and Masters of Arts degrees from the University of California,
Berkeley, in 1940 and 1941 and married Elizabeth (Betty) Burnham in 1942. As with many in his
generation, his academic career was interrupted by World War II when he served as a physicist in
the U.S. Naval Bureau of Ordnance.

Bart was a highly creative and productive researcher. With Per Scholander and Knut
Schmidt-Nielsen, he was one of the founders of the modern fields of comparative animal
physiological ecology and behavioral physiology. His research career extended over 63 years and
led to the publication of over 150 research papers. W.R. Dawson, his first doctoral student,
gives a detailed description and analysis of his research output in the journal Integrative and
Comparative Biology, Volume 45, pp 219-230 (2005). Bart had a broad, synthetic view of the
functional adaptations of organisms to their natural environments, bringing together the fields of
physiology, behavior, and ecology, and did important work on plants in addition to his many
studies of animals. He was a strong advocate of studying organisms in the field as well as in the
controlled conditions of the laboratory and was flexible in his research methods, bringing new
technologies to field investigations. He was a pioneer in the study of desert organisms and
extended his comparative approach to organisms in both Australia and South Africa. His last
published words in 2005 concern his personal philosophy and approach to research and may be found
in the journal Integrative and Comparative Biology, Volume 45, pages 330-332.

The stature of Bart’s contributions to science was recognized by his elections to the American
Academy of Arts and Sciences in 1981 and the National Academy of Science in 1985. He received
many other honors, including the first Grinnell Medal awarded by the Museum of Vertebrate Zoology
at the University of California Berkeley in 1983 and an honorary D.Sc. by the University of
Chicago in 1987. He served as President of the American Society of Zoologists – now the Society
for Integrative and Comparative Biology (SICB) – in 1980, and he personally considered his most
satisfying honor to be the establishment within SICB of the George A. Bartholomew Award in 1992.
That award is given annually to a “Distinguished young investigator in comparative physiology,
comparative biochemistry, or related fields of functional biology.”

Bart was a distinguished teacher at both the undergraduate and graduate levels, but especially of
graduate students, and he was presented with a UCLA campus Distinguished Teaching Award in 1966 in
recognition of his mentoring of graduate students. His reputation as a mentor has become near
legendary: a high proportion of his 42 doctoral students and 14 postdoctoral scholars have gone on
to become significant figures in their own fields of study. His academic genealogy is described
by A.F. Bennett and C. Lowe in the journal Integrative and Comparative Biology, Volume 45, pages
231-233 (2005) and is given in detail on a website:
http://bartgen.bio.uci.edu/tree. Through the
Department of Ecology and Evolution’s Bartholomew Research Fellowship Awards, established by Bart
and Betty after his retirement and significantly augmented by Bart and Ruth before their deaths,
he continues to support graduate students working in areas related to his broad interests.

Beyond the classroom, Bart worked extensively for many years with the eminent photographer Robert
Dickson of UCLA’s University Extension to develop a series of 30 teaching documentary films that
are still widely used. With colleagues Malcolm Gordon, Fred White, Alan Grinnell, and C. Barker
Jorgensen he was a major contributor to a textbook of comparative ecological physiology that had
four editions between 1968 and 1982 and that was both widely adopted internationally and
influential in the development of its field. He also co-authored an introductory zoology
textbook.

Bart was one of the most influential figures in the post-World War II history of his department,
initially the Department of Zoology, then Department of Biology, then Department of Organismic
Biology, Ecology and Evolution, and most recently Department of Ecology and Evolutionary Biology.
He facilitated the transition in the later 1950s from a departmental style that was somewhat
authoritarian and centralized to its present egalitarian and participatory mode. Bart was
low-key, soft spoken, thoughtful, creative, and a balanced observer and participant in
departmental and campus affairs throughout his 40-plus years at UCLA. He served terms as chair of
both the separate Zoology and Botany Departments and then helped facilitate their merger into a
unified Biology Department. Bart was an important influence in the founding of UCLA’s Molecular
Biology Institute and in the recruitment to the department of the first group of
molecularly-oriented faculty before the separate Department of Molecular, Cell, and Developmental
Biology was formed.

Bart’s wife Betty and mother of their two children, Bruce Bartholomew and Karen B. Searcy, often
she accompanied Bart on many of his travels until her death in 1993. In 1994 Bart married Ruth L.
Myers and the two of them traveled extensively and enjoyed painting. Ruth died in August 2006, a
short period before Bart. Bart leaves his two children, Bruce Bartholomew and Karen B. Searcy,
four grandchildren, Mulan B. Tarnas, Yuan Bartholomew, Brian Searcy, and Steven Searcy, and 3
great grandchildren Camden, Tristan, and Caiden. But in addition to his family, Bart leaves an
academic legacy of many students, an administratively reorganized life sciences at UCLA, and a
field of research in the biological sciences significantly transformed by his own research. He
will be missed deeply and by many.