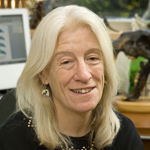 I am a paleontologist interested in deducing the ecology and behavior of extinct animals. For example, how can we determine if extinct species were social? At Rancho La Brea (the famous tar pits in Los Angeles), large Pleistocene carnivores were lured to their death by the sounds and smells of herbivores trapped in sticky asphalt. Studies of living African carnivores reveal that social species, such as lions, hyenas, and jackals, are much more likely to come to the sounds of dying antelope than solitary species such as leopards and cheetahs. Apparently, it is better to arrive at a carcass in a group of others in case you have to fight for possession. At La Brea, the dominant carnivore species were dire wolves, sabertooth cats, and coyotes. Like modern lions, the sabertooths even brought their cubs occasionally. Based on the African studies, these findings strongly suggest that all three of these species were social, and provides some of the best evidence for sociality in a sabertooth cat thus far.