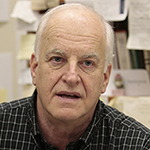 I study sound production and hearing in frogs. Frogs call to attract mates. Several years ago Dr. Albert Feng from the University of Illinois and I discovered a Chinese frog that has an unusual ear morphology-it has an ear canal, much like mammals, unlike any of the other 6,000 species of amphibians, except one other. What was this ear morphology for? We discovered that this canal enabled this frog to communicate with ultrasound-previously unheard of, if you get my drift. We knew of a second frog from Borneo with similar ear morphology, and we wanted to see if it also communicated with ultrasound. So in 2007 my graduate student, Tori Arch, Dr. Ulmar Grafe from Brunei, and I went to Sarawak, Borneo, where we found the frog in Gunung Mulu National Park. Sure enough, this frog not only produces calls with ultrasonic components, it also produces calls that are completely in the ultrasonic range, inaudible to humans. They responded to ultrasound in playback experiments done in the animal’s natural environment. Back at UCLA we recorded from the midbrain of these frogs and showed that they could detect sounds of up 38 kHz, the highest frequency known to be perceived by any amphibian. Humans can hear about 20 kHz; anything beyond that we call “ultrasound.” But why do these frogs make ultrasonic calls? The answer became clear when we examined their habitat acoustics. They live in rushing streams with loud sounds of falling water, but these sounds are in the audible range. So the frogs call in ultrasound so they can hear each other at frequencies where the rest of the environment is quiet. Now we need to rewrite the textbooks on hearing ranges of vertebrates.