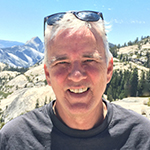 I am a geographer and paleoclimatologist interested in the lessons of the past for understanding our present-day climate change predicament, especially here in the North American Southwest. This region has experienced arid conditions since the start of the 21st century. In Southern California this has resulted in “Perfect Drought” conditions, with negative impacts on local water resources, supplies from northern California, and water from the Colorado basin. Allocations from the Colorado River were based on optimistic estimates in the 1930s of long-term average discharge. This over-allocation underscores the problems with relying upon short temporal data sets to set long-term resource policy. An important question is whether the Southwest is experiencing a temporary drought or a transition to a longer-term, more arid climate. One great unknown is how the Pacific Ocean and the El Nino – Southern Oscillation (ENSO) system will respond to increasing global temperatures. Empirical data from the 20th century and climate model predictions are inconsistent. I have been approaching this question by examining how previous prolonged episodes of climate warming have impacted the ocean and the hydroclimatology of the Southwest. Past warming periods include the Medieval Warm Period (~800-1300 AD) an Holocene Thermal Maximum (~8000 to 3000 years ago). Climate and ocean measurements are not available from these periods, but we can use natural records such as tree-ring chronologies and fossil diatom assemblages from lake sediments to provide proxy-based records of past hydrology and past ocean temperatures. Although such reconstructions are imperfect, the consistency of resu among different methods indicates that the eastern eastern Pacific has typically cooled during past warm periods and California has been particularly prone to increased aridity.