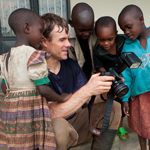 As a student of animal behavior, I am curious why some species are aggressive to other species, and I want to understand the evolutionary consequences of such aggression. The Nobel Prize winning ethologist, Konrad Lorenz, suggested in 1962 that interspecific aggression might help explain the spectacularly diverse coloration of coral reef fishes. Lorenz’s aggression-based mechanism for generating species differences has always been overshadowed by Brown and Wilson’s (1956) reproductive character displacement hypothesis, which says that species evolve divergent color patterns for species recognition to avoid mating with the wrong species. Previous attempts to test these two hypotheses have not cleanly separated the predictions, which predict the same geographic patterns in signals (less overlap in signals when species occur together than when they are geographically separated). We got around this problem by directly testing for shifts in what animals recognize as competitors. Our study animals are damselflies (related to dragonflies, but damselflies can fold their wings over their back when resting, and dragonflies cannot). We discovered that territorial male damselflies pay attention to species differences in wing coloration to tell intruders of their own species apart from intruders of other species, but only in places where the two species naturally occur together. Our experiment is one of the clearest demonstrations yet of an evolutionary process that is probably very common in nature but which has largely been overlooked.