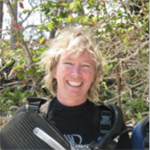 Caulerpa is a common tropical green large alga (macroalga) that has been dubbed the killer alga by the media, not because it kills humans, but because of massive blooms of this species that blanket and smother coral, killing whole sections of reefs. But how does Caulerpa persist between blooms, when it can become rare? We became interested in the question of how patches of Caulerpa are maintained in low abundance in the eastern Pacific but then can episodically bloom and spread over entire reefs. We discovered that blooms only happen when a combination of factors is just so. These factors involve interactions between herbivores, nutrients. and another alga that grows on Caulerpa and acts as a defense against herbivores. Together, they can create the perfect storm of interactions, triggering harmful blooms. The lesson of our study is that to understand and be able to predict the complex behavior of coral reef communities, it may be necessary to consider more than a single potential causal factor, but rather, the interaction of several factors, some of which might be quite unexpected. Our new understanding of the complex set of interactions leading to bloom events will contribute to the protection and conservation of coral reef habitats around the world.