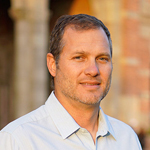 I am interested in phylogeography-putting the evolutionary tree of life (phylogeny) into a geographic context. I am decoding (from sequencing the DNA of genes) the history of the origination and dispersal of marine organisms, particularly among the complex archipelagoes of the Indopacific. I study both invertebrates and vertebrates (e.g., fish). The story of the giant clam is an interesting example. It bores into tropical coral reefs and can’t move as an adult. However, the larval stages are planktonic and drift passively on ocean currents. One might think that these currents would mix the larvae of giant clams everywhere, but our genetic studies show that this hypothesis is not true; many populations of giant clams are very isolated. One indication of isolation, we discovered, is that these populations have evolved their own unique communities of symbiotic algae in response to different water temperatures. There are several potential practical benefits of our research. The genetic structure of giant clam populations provides useful data for planning networks of marine reserves for thes threatened ecosystems. Also corals and giant clams share the same algal species (from which clams and corals derive sugars and other vital substances). Corals lose these algae when sea temperatures rise, so-called coral bleaching, but clams do not. Thus, clams may provide a local reservoir of algae to help corals recover following bleaching episodes.